Too Many Titles to Choose From

Car Rental Fiasco
So I left the girls at the Phoenix airport and headed to the NTEN Conference in San Francisco. I arrive a day early so that I could extend my birdwatching by going to Point Reyes National Seashore on Sunday. I called the hotel to ask if there was a car rental nearby. They said yes, so I proceeded to the hotel only to find that all of the rental car agencies were already closed. Oy. Long story even longer . . . I had to take a shuttle back to the airport at 4:40 AM Sunday to rent the car.

I Don't Remember US1 Being the Windy (that's windy as in not straight)
Connie and I made the trip to Point Reyes about 10 years ago which is why I decided to go again yesterday. I just don't remember the road being soooo windy. It's a good thing that Enterprise gave me a free upgrade to a Nissan something or other. It was quite fun to drive that road without a passenger so that I could go as fast as I wanted.

Is it Always So Windy? (that's windy as in blowin' a gale)
I started the birding at the Beaver Valley Ranger Station which was really quiet at 7:00 AM. I saw a colony of Acorn Woodpeckers and got to watch a White-tailed Hawk hover hunting in the field. Here are a few photos - 1)hovering 2)flying away with it's catch 3) the pocket gopher 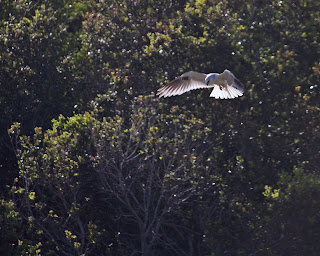 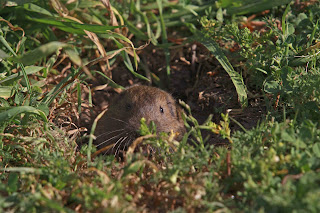 That Loon Wants to Poke My Eye Out
After a great day of birding, I was making my way back down US1 and saw 2 cars pulled off of the road and a Loon sitting on the road. That is NOT good. It was a Red-Throated Loon just coming into breeding plumage with a little red patch under his neck. Loons can bearly walk well due to the placement of their legs at the back of their body and cannot take flight unless they get a runnning start on the water.

The guy in the other car wanted to know if I had a "plan" when I got out of the car with my sweatshirt. Of course I had a plan. I was trained for such an occasion by the Tri-State Bird Rescue in Delaware during the big oil spill a few years ago. Diane and I volunteered to bathe the affected geese in Dawn dishwashing detergent and have the Coast Guard Citation to prove it. So, I put my past bird rescue training into action! I threw my sweatshirt over the bird's head, grabbed it by the neck, threw it under my arm and walked it over to the water.

That bird got it's head out of the sweatshirt and looked at me with it's red eyes. He really did want to poke my eyes out and would have if I let go of his neck for a second. I plopped him in the water and away he swam. He looked fine in the water and didn't even thank me. Some nerve. And they guy in the other car took off before knowing if the bird was OK. Oh well, what a day.
Posted by Linda