There's One in Every Crowd

Everyone knows one of those people who can pick up a new skill quickly, play a game for the first time and win, doesn't need glasses . . . Well that ended today for one of the nerds.

Barbara started out not wanting to purchase, borrow, or even use binoculars.  "No thanks, I can see that bird just fine" (eyes rolling and choice words being mumbled from the rest of us).  We practically begged her to borrow an old pair of binoculars so that she wouldn't stand out.  Ha. That's a riot.  We wanted her to wear binoculars on a "bra" in a shore town where others were wearing sunglasses and bathing suits so that she didn't stand out.

Barbara and I are signed up for the "Shorebirds with the man who wrote the book" workshop next week.  It will be 3 days of shorebird identification with Michael O'Brien who literally wrote the Shorebird Guide.  I was willing to go alone since shorebirds are notoriously difficult and frustrating and not cute like warblers but Barbara signed up too.  We have been discussing where to stay, what to take, etc.  I told her that I was taking our spotting scope for sure.  It is an oldie-but-goodie from Connie's dad - Bausch and Lomb circa 1960 something.  That was the unintentional bait.

She just casually mentioned that she did some research on spotting scopes and found a few that had high ratings and were not very expensive.  She sent me the list and asked what I thought. By telling her that she should really try them out in person, the bait was alluring. Then she asked if I would go to CMBO store to try some out.  The hook was set, now all I had to do was reel in the fish and not let her spit out the hook.

We spent a long time looking through all of the scopes on display at CMBO Northwood Center.  The scopes that Barbara had researched weren't even on display.  They were laying at the bottom of a display case for losers.  The clerk obliged us and put them out for comparison.  It was like looking through the bottom of a vaseline jar compared to the Swarovski, Zeiss and Kowa top models.

The Swarovski ATS-80 HD Spotting Scope with 20 - 60 mm eyepiece turned out to be the bait that finally caught the 5 foot, 7 inch Barbara. The Bausch and Lomb is now relegated to the backup scope which is fine with me. 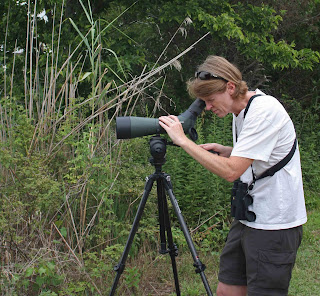 The first bird viewed through the glorious Swarovski ATS-80 HD just happened to be the rare and glorious King Eider that has been hanging around the Concrete Ship for the last few weeks.  Pretty fitting.
Posted by Linda