Here are some photos of shorebirds that we learned.  For instance, here is a Short-billed Dowitcher in fresh juvenile plumage: 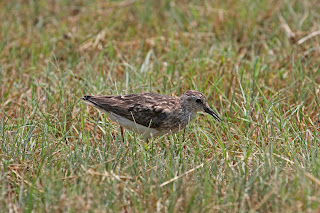 Psych!  This is a Least Sandpiper in worn plumage.  This is really the second post on how to freak out the workshop leader.  Notice that this bird is in the grass.  That is another thing we learned - Least Sandpipers forage higher from the water than other "peeps".

Here is Semipalmated Sandpiper on the beach at the Villas.  I'll have you know that Barbara and I trudged through thick black muck to get out to the sandbar where these birds were running around.  We'll probably get some disease. 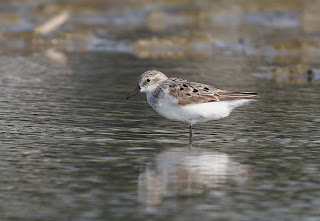 Notice the few black feathers on the back of this bird.  They are the leftover breeding plumage feathers that have not molted yet.  We learned that anyway.