If you go to Stone Harbor Point any time over the next few months, you'll notice my handy work. Well, mine and about 15 other volunteers, that is. I helped the Conserve Wildlife Foundation of NJ to put up fencing and signs to protect bird nesting habitat on Stone Harbor Point. We basically strung line between PVC posts and put up these signs (not a great photo): 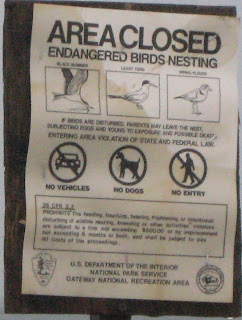 The "fence" is supposed to keep people away from Piping Plover, Oystercatcher, and Least Tern nests along the point. The volunteer project started at 10 AM but I was there early so I took the opportunity to take some photographs of Ruddy Turnstones, tons of Dunlin and Sanderlings along the water and resting on this jetty: 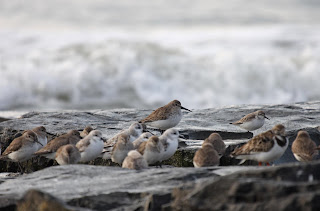 Here is a pair of Oystercatchers that didn't seem very skittish. One of the volunteers was a nice young girl that was doing a school project. The Oystercatcher was one of the birds that she was hoping to see. Well she got to see a few. 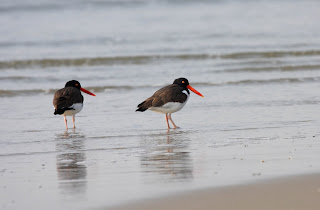 Click to enlarge this next photo. The similarity between this birds legs and Connie's is striking! Good thing we'll be at the beach alot this summer so she can get a tan. 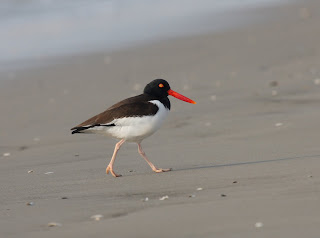 I spent about 20 minutes crouching next to the jetty waiting for the sun to come out from behind some clouds when I heard a crash behind me. I turned around to see this Herring Gull dropping a conch shell onto the rocks from about 8 feet in the air, then grabbing it to drop it again. Seagull fun, I guess. 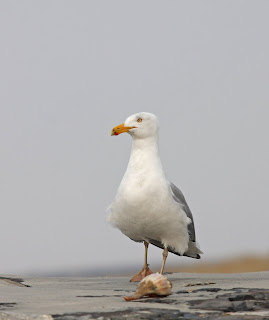 The gull with his prize 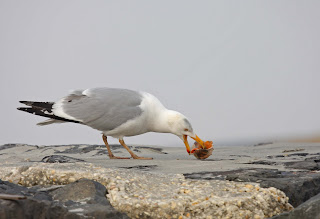 Picking up the shell 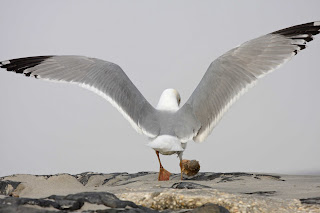 Shell is still in the air
The other interesting note from the day is that an injured harbor seal was rescued from the point by the Marine Mammal Stranding group. The seal's progress can be checked Here. He (or she) is #75.
Posted by Linda