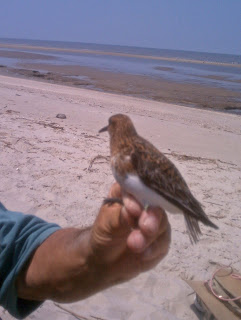 Sandering
What a cool way to spend a hot day at the shore. It all started with Connie walking the dog while I sweat my ass off mowing the lawn(s). Connie saw a guy with binoculars walking toward the protected beach. She was just about to say something to him, when he stopped and scanned the beach with binoculars and turned around to leave. He told Connie that they were going to band some birds in about a half hour at Maryland Ave and that she could come and watch. Meanwhile I was at 243 Maryland Ave mowing around Poison Ivy and feral Cactus - but I digress.

We grabbed our binoculars and went to the end of the street to join the group. The group was a collaborative effort from a few state and federal agencies along with non profits including the Fish and Wildlife Service and Conserve Wildlife New Jersey group that I volunteered with last week. I had already met Mandy and Larry at the Shorebird Steward training, so they invited us to participate in the effort rather than just watch - cool. 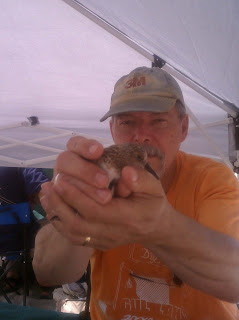 Gary with a Sanderling
The process of banding shorebirds starts with scouting the beaches to find a location with alot of the target species - Sanderlings - which ended up being Maryland Ave. Next, the experts set up the net which is attached to cannons along the dune. The volunteers creep down the dune path and keep our heads low so that the birds can't see us. Then, on the signal ( 3, 2, 1, FIRE!), the cannon goes off and shoots the net over the birds on the beach. Then the banders (including me and Connie) run like banchees down to the water's edge and start moving the birds into the middle of the net, making sure to get any birds out of the water. Next, other volunteers start removing the target birds from the nets and placing them into covered bins - 20 Sanderlings to each bin. The bins are then placed under a tent to keep the birds cool until we can get them banded.

Once we had enough birds, the rest were released from the net and we started the banding process. I was put into Larry's group and Connie was in Clive's group. Clive is an Australian who invented the cannon net 40 years ago and is a pioneer in the field of shorebird banding and conservation. Larry is an expert in shorebird conservation and works with geolocators to track migration and nesting. 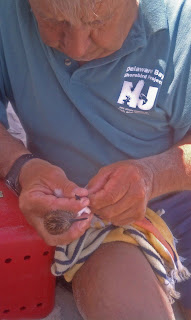 Clive attaching the band
Connie was the data recorder for her group. The banders would tell her the tag numbers and weight of each bird and she would record that info. She did that for 90 birds I was the weigher in my group. The young Chilean woman who was taking bill, head and wing measurements would hand the bird to me. I would put the bird in a little piece of PVC pipe, place it on the scale and tell our recorder the weight (in grams) and then release them on the beach. I did this for 65 birds. 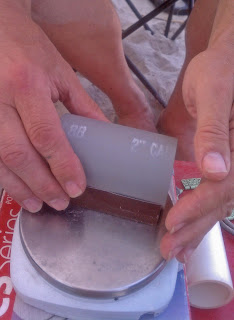 Sanderling in the PVC pipe being weighed
Most birds met or exceeded the weight needed to make the rest of the migration to the arctic which is 83 grams. Some were still under weight and needed to fatten up a bit more before taking off. Connie's group had the fattest bird - 106 grams.

It was a really great experience. Connie told me everything she learned about the bird's anatomy, migration, weight, age of birds etc. She asked me what I learned and got mad when I told her what I learned - Larry went to Archbishop Wood, Joan grew up in Mayfair but moved before high school otherwise she would have gone to St. Huberts, Phillipa is from the UK and is here with her father who is part of the banding group, Gabby is a veterinarian from Chile and is here with her husband Sergio for the experience, Jane is on the board of NJ Audubon and likes to make up names for the birds based on the tag number ("Hip" for H1P, "Jim" for J1M, etc) and also likes to sing to the them while the pipe dope which secures the flags on the bird's leg dries, Mandy is from NJ and wants to grow her hair out like Snooki (not really) . I think Connie wanted me to learn more about the birds. . . 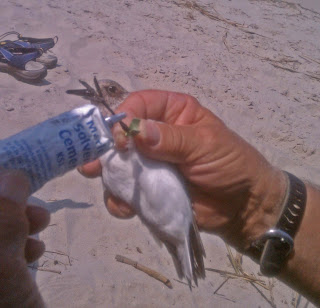 PVC pipe dope being applied to the leg flag
All photos courtesy of Connie's cell phone today. The telephoto lens didn't do me any good when we were this close to the action.
Posted by Linda

I had a really similar accidental shorebird banding experience too, the previous day, and wound up weighing ruddy turnstones with Clive and Gary! We're leading parallel Philly birder lives!

Wow, what an incredible day! I'll bet this is an experience you'll never forget. Wish Barbara and I had stayed down another day. (Meanwhile, why wouldn't you have asked where Joan went to high school, since she grew up in Mayfair? Falling down on the job, in so many ways....)

Wow, what an awesome experience! Accidental bird banding, that's an accident I'd like to have. :D