Barbara and I just got back from 2 days in north Jersey birding Highpoint and Stokes State Parks with the NJ Audubon workshop. It was advertised as a birding by ear workshop but the most "by ear" that I got was the all of the yapping by the group. It started out with someone not getting the message about the new start time and consequently being late (and not apologizing to the group) which other people complained about and went on from there. The workshop was really a 2 day field trip with some emphasis on bird song rather than a true workshop with structured learning anyway. I should have paid more attention in my Organizational and Group Dynamics class in college. It would have come in handy! 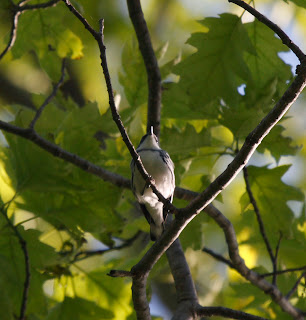 You can't see the beautiful blue color of the bird in this photo, but you can see the nice "necklace" indicating that this is the male.
There, now that is out of the way, we can move on to other highlights including a Porcupine sleeping in a tree: 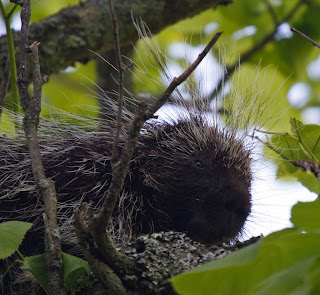 I want to bring this cutie home as a pet.
Barbara and I stayed at a really cute motel called Myers Motel in Milford PA which wasn't a motel at all, but little cabins. We went up on Tuesday evening so that we would have a shorter drive on Wed morning at 0'dark:30. We were delighted to find Chris - our handsome Swedish friend - was staying at the same place. He carpooled with us for the field trips which was alot of fun. All three of us forgot that we were supposed to pack a lunch, so we had to run out to McDonald's to pick something up. The trip leaders told us to meet at the campground for a picnic lunch. We had to take a photo of this sign on our way into the campground because it cracked us up: 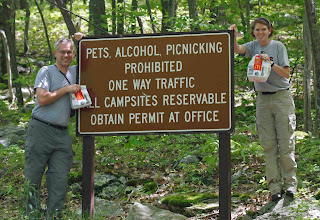 No Picnicking!
Another highlight was this beautiful Canada Warbler that we saw along the bog trail at Highpoint. We met a serious photographer along the trail that was a really friendly. This guy was almost too friendly. Usually, when we see serious photographers in the field, they give us the cold shoulder hoping that we will go away and leave them to their secret find. Not this guy. Yack, yack, yack about what he was doing and asking what we were seeing. Then, he ended up on the boardwalk with us as we struggled to see the Canada Warbler through the shrubs. Our trip leaders were "pishing" and squeaking trying to get the bird to come closer. Not the photographer. He didn't struggle or pish or squeak. He just pulled out his iPod and played the Canada Warbler song which made the real bird come closer to investigate. Snap, snap, snap went the camera and viola, he had his shot. I got this shot which isn't great due to the limitations of my lens and the limitations of my skills: 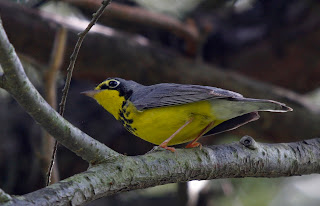 Canada Warbler
Speaking of pishing and squeaking to get birds to come closer, the entire group was amazed by one of the leader's ability to imitate Barred Owl. Scott Barnes sounds more like a Barred Owl than a real owl. He was amazing. He would do the call - "who cooks for you, who cooks for you all" to get the woodpeckers riled up. Apparently, woodpeckers and owls have a long standing feud over nesting holes kind of like the Hatfields and McCoys. He made this call often but one time another owl called back - "who cooks for you, who cooks for you all" and then flew closer. The Barred Owl landed in a tree about 100 yards away through the woods. We all got a good look even though we had to line up: 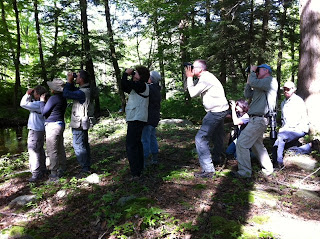 taken with Barbara's iPhone
I was not able to get a photo of the owl since it was back in the thick of the woods. But I did manage to get a photo the other big highlight of the day - Mississippi Kite catching bugs and eating them in mid air out at the Highpoint monument overlook. What a great find. Here is a lousy photo, in which you can see the field marks of the bird - whitish head, pointy-ish wings, and feet up to it's mouth while it picks apart a bug in mid-flight. 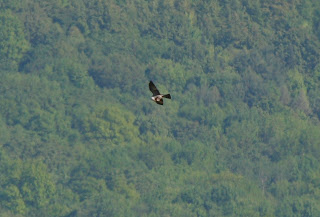 Mississippi Kite
(yes, I still have to sign the m-i-s-s-i-s-s-i-p-p-i song in my head when typing Mississippi)
Group Dynamics not withstanding, we all had fun and learned something. I learned that NJ Park Rangers are not the nicest. Although he didn't catch us picnicking, he did yell at me for parking outside of the designated parking spots at the monument overlook even though I explained that I was trying to use the car as a tripod for the camera to get this group shot, and there were no other cars around except ours. 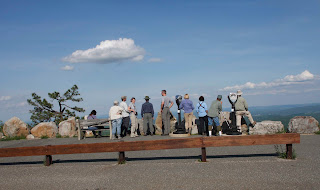 Group shot taken from the car which was legally parked in the designated spot - we could see NJ, NY, and PA from this overlook
I highly recommend a trip to Highpoint State Park for birding. I also recommend going with a group for your first trip if possible as the park is pretty big and you can miss the "hotspots" if you try it on your own. You can decide whether to brush up on your group dynamics skills or not.
Posted by Linda

Hi Linda,
"You talkin' bout me!"
Thanks for sharing. I enjoyed the trip in spite of the leaders. Probably the strangest workshop I've ever been on. Sorry Annie and I missed the Mississippi(song)Kite.
The ceruleans were awesome!
See ya, Barb
Congrats!! on the place @ the Villas.