We ARE Smarter than 5th Graders!

Whew, we completed our 2nd annual World Series of Birding this Saturday and beat those pesky 5th graders. We got 121 species (5 more than last year) while the elementary school children only got 118. HA. We showed them That's the good news. The bad news is that the 8th graders beat us again. They got something like 143. 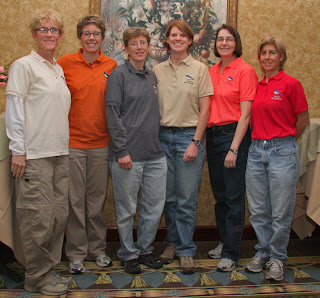 Philly Bird Nerds at the Awards Breakfast (no, we didn't get an award)
We started at 2:55 AM and ended after 9:15 PM and had a lot of laughs along the way. When you do a "Big Day" contest like this, you see the same groups of birders and teams at various locations throughout the day. We tend to amuse ourselves by giving them names. Like "No Stripes", the couple that has the same Mini Cooper as Diane, but no stripes on the car which doesn't makes it look as nice as Di's. And "Marge and Judy" the 2 women that I tried to descibe the location of the Phoebe nest that made Diane tease me for the rest of the day so much that Lori almost peed her pants. And "Those Crazy Bikers" - the group of guys who did the whole day on bicycles. We vowed to run them over with the Suburban but gave up on that idea after the parents of the one guy showed us Norther Harrier at Stipson's Island Road (and took the photo above).

We have no doubt that they have names for us too. Especially on this Big Day. You see, I had a genius idea last week to quell the onslaught of mosquitos that we endured last year - screens for the car windows. Yup. We put screens on the windows of the Suburban. My genius idea was to use duct tape to secure screen on the outside of the truck. The plan got even better when we talked to the guy at Napa Auto Parts who sold us "automotive body work" tape which will not damage the paing and easy to remove. 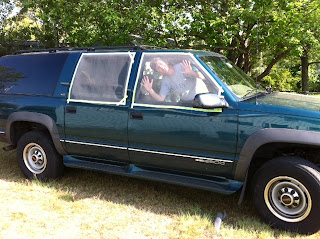 nothing but class for us
We also got a life bird for all of the team members - a Parasitic Jaeger that was chasing terns around off of Cape May Point. We didn't get a lot of common warblers including Northern Parula that we were seeing and hearing every day since mid-April even in the middle of Philly. We didn't get Cedar Waxwing. And we didn't get our "signature" bird - the Black-throated Blue Warbler (enlarge our team photo above to view the logo). We did manage to get Great Horned Owl this year. We almost didn't get Bald Eagle which are a given along Delaware Bay any other day.

I want to thank all who made the day a big success including the Nerds:
Tara who sacrificed her birthday for scouting on Friday
Di who limped through the day still recuperating from knee surgery
Lori who suffered the day without her beloved warblers
Barbara who endured the most scouting with me
Connie who had to miss most of the day due to a funeral and showed up for the end at 7:30 PM

Big shout out to Barb Kolb who graciously designed and embroidered our new team shirts on short notice. Thanks Barb, at least we looked good at the Awards Breakfast.

Huge thanks to Marleen, Sheila and the rest of the WSB support staff/volunteers for making this year another fun event.

At last, the final thanks goes to you, the readers and pledgers. Please send a check made out to NJ Audubon in the amount of whatever you pledged per bird x 121 to me. I'll collect and forward the whole lot to them.