Connie and I had a great day of birding on Friday around Ft Myers Florida.  We spent Thursday evening with her aunt and uncle who live in Ft Myers Beach. It was lovely.  We watched the sunset, ate great home cooked meal, talked and saw a slide show of their recent trip to Morocco.  Aunt Gloria reminded us that Ding Darling NWR is closed on Fridays - a lesson that we have learned the hard way in the past - so we decided to spend Friday scoping out new birding locations.  We started the day at 6 Mile Cypress Slough which was about 5 minutes from our hotel and had a great boardwalk through cypress swamps very much like Corkscrew Swamp. This place was interesting due to the Barred Owl report on Birdseye.  One of the volunteers told us that the bird was seen most often "in the old cypress tree" near Wood Duck Pond.  Dude, look around. The place is a cypress swamp.  "You know, the cypress tree near Wood Duck Pond" does not help when the place has about a zillion cypress trees!  Anyway, I got these shots of Ibis and a pig.  We also saw tons of Palm Warblers. 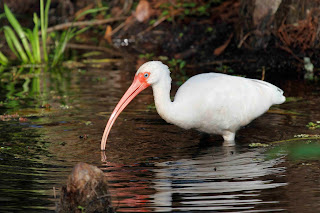 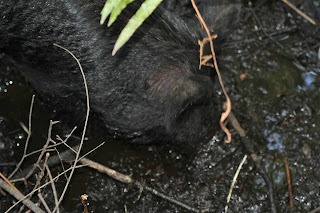 I had 2 target birds on this Florida trip:  Snail Kite and Short-tailed Hawk.  We got Snail Kite(s) at our next stop - Harnes Marsh which is just east of Ft Myers.  Snail Kites was reported for at least a week there.  The marsh is located smack in the middle of a suburban neighborhood.  You actually access the marsh from 38th street, but once you are there, it is a pretty big space.  You have to walk the dirt road which surrounds the marsh. Birds were everywhere.  We immediately saw a Bald Eagle, lots of Egrets, Herons and Coots and an Osprey.  We ran into a group of senior citizens who were obviously on a bird walk.  We asked about the Kites and were told to ask the tall guy in the baseball hat.  He knows this place like the back of his hand.  Great! He'll give us the lay of the land and hopefully guide us to the Snail Kites.

We caught up with the leader and informed him that he was recommended as the expert.  "You see that dead tree there?" he asked.  Yes, the tree was about 200 yards down the path. We could clearly see the tree.  Then he said "We have never made it past that tree, ever. You see these people?  They are hot and tired and returning to their cars."  He wasn't kidding.  He really had never been past the tree.  He did tell us that they saw 2 Snail Kites through the scope. Both immature or females. He also gave great description of what to look for and we did see the kites.

Of course, passing the tree became a goal that we had to meet and we did indeed go past the tree.  We didn't have to go far past the tree before seeing the kites. At first, I thought it might be a Harrier due to the size and white rump patch, but it was indeed a female Snail Kite.  She was quickly joined by the male who put on a show for us hunting, well, snails.  These are really bad photos due to sun glare and heat shimmer but you can clearly see the kite's markings.  Look hard to see the orange hooked bill that it uses to pull the snails from their shells. 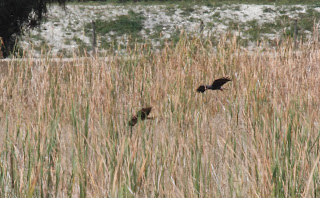 Male and female Snail Kites. Male is the dark gray bird on the right. 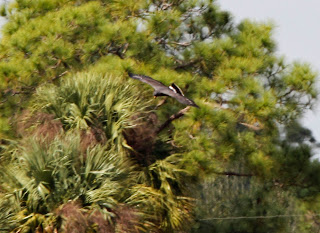 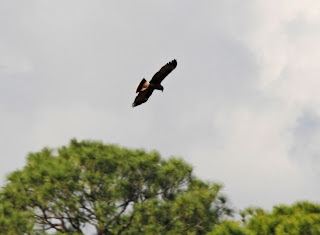 Male Snail Kite soaring - you can see the profile of his hooked bill here. 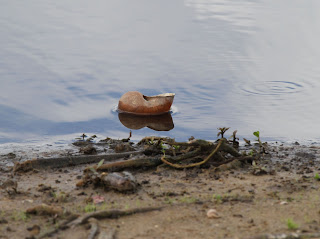 The object of the Snail Kite's desire.

As if that wasn't enough, Connie yelled "Lin, look at that big hawk that just took off next to us".  It wasn't a hawk at all - it was a Crested Caracara!  Right next to us.  Lousy photo since I was surprised and the light was still really bad. 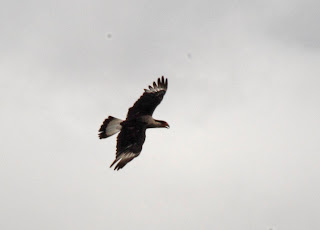 Here is a better photo of one from our trip to Belize a few years ago. 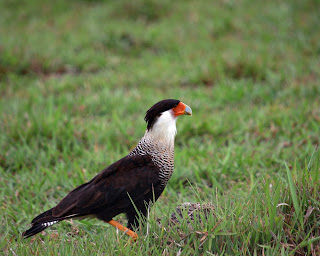 All of this, and it wasn't even lunch time yet.  I'll post the rest of the day next.

Glad you had a great trip. Loved my time with Mimi...does she ask about me?