Sunday Walk and Answer to the Mystery

I'll start by saying that the DVOC gang all agree that they mystery shorebird from the last post is a Long-billed Curlew.  Thanks to all who posted a comment with your thoughts.  The conclusion was based on the thickness of the bill rather than the length and the overall plumage pattern.

Now on to this morning's walk. It is February in Pennsylvania but you wouldn't know it by listening to the singing birds this morning.  It sounded more like spring.  Roxy and I went to Pennypack Trust and had some nice interactions with Bluebirds, Song Sparrows, a flock of Turkeys and a surprise encounter with this Cooper's Hawk. 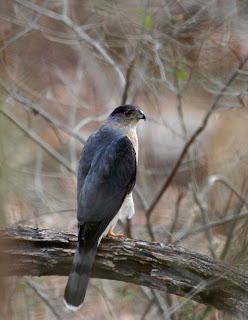 It is not unusual for a Cooper's Hawk to sit low in the woods watching for his next meal. But it is unusual for it to sit there and let me take a few photos.  I had to use manual focus in order to cut through the obstructions but it is still a pretty good photo that shows the white tip of its rounded tail which is why I am calling this a Cooper rather than Sharp-shinned Hawk.

I am still trying to get a good shot of a Bluebird that shows the stunning blue. 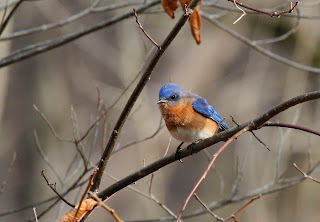 Here is the male Bluebird singing 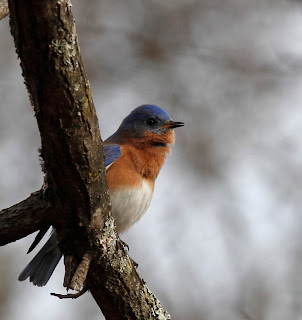 Here he is singing again.

Here is a video of the singing birds:

Great HD video! And great shot of the Cooper's hawk. There's still one in my office parking lot, waiting for the sparrows to come out from the bushes.