Circle of Life in Florida

Warning - these photos are not for the faint of heart. They are probably not suited for vegetarians.  They made my stomach turn a little bit and I was the photographer.

23 years ago, Connie and I had our first apartment together.  We were not allowed to have any pets, so we got a lizard from a carnival.  Then we got another one to keep the first guy company.  We kept those 2 in a 10 gallon fish tank and expected them to last maybe a year.  Well, 4 years later, they were still going strong.  We named them Herby and Skippy and fed them live crickets (not fun).  One of them developed a tumor on the side of his head and still didn't die.  We started calling him Lumpy.  After 5 years, they finally died and we got rid of the tank and got a dog (Daisy, the best dog ever) and a cat (Mimi, who as you know is still alive and travels to the shore with us).

Why am I chronicling our pet history for you?  First, to take up room on your computer screen so that you don't see the photos if you don't want to.  And second, because here in Florida, those lizards are wild.  They are called Anoles and they run around everywhere.  And, they become the food for Herons and other birds.

I happened to be photographing a Little Blue Heron from the boat dock the other day when he snapped this little guy up from the grass.  It is heartbreaking to see the lizard struggle, but I guess the heron has to eat too. 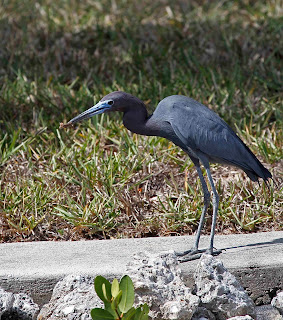 Here is the heron just after he plucked the lizard from the grass. 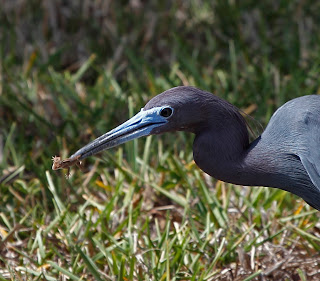 Here is a cropped photo. 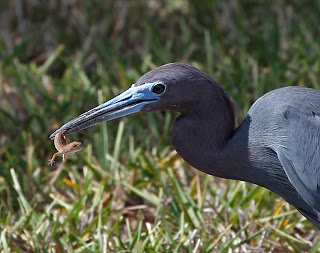 This poor lizard looks like he is yelling for his life. 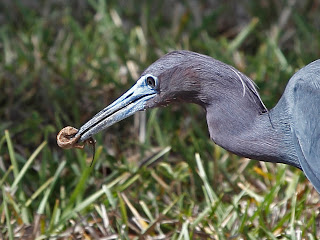 Now he is biting the heron's beak trying to escape.  Aaagghhh.

With one quick gulp, the lizard was no more.  Wah!  There was nothing I could do but witness the circle of life in action - and get a little queasy while doing it.
Posted by Linda

I sat with Linda as she reviewed the photos on her computer, trying to find the best ones. I, too, got a little sick looking at the carnage. I think it's the lizard's splayed little "fingers" that get me.