I just found out what a TimberDoodle is - its another (cuter) name for the American Woodcock - a small shorebird that lives in the woods rather than by the shore.  TimberDoodles were all over the electronic airwaves last week.  I received emails, other blog posts, text messages, and photos about them.  Why?  Because its that time of year again - TimberDoodle Dance time.

Woodcock dancing time starts and peaks during the first 2 weeks of March.  This is when you will hear them in the fields near your house or local woods "peent"ing.  It really sounds like that.  Go ahead, make that sound - "PEEENT" and you have just done a spectacular imitation of a TimberDoodle!

Now, drive to a field nearby that has some woods close to it at dusk and listen.  "PEEENT!" means that you should get out of the car and stand in the field to witness the "dance".  Listen for whistling sounds above your head.  This is the TimberDoodle actually doing the "dance".  The male TimberDoodle will PEENT a few times, then fly into the air circling the field going higher and higher until he is completely out of sight.  Then he plummets back to earth.  All of this to impress his lady friend who generally sits hidden in the weeds acting uninterested.

You can hear him doing this more than you can see him since it occurs at dusk.  His feathers whistle during the flight.  You can follow the whistling sound going around and around.  If you are lucky, like Di, Barbara and I were last night at Jake's Landing - you will see the TimberDoodle's silhouette against the dusk sky as he ascends.  If you are really lucky like my friend Patty was at Rancoacas Nature Center - the TimberDoodle will plop right down next to you and have his photo taken! 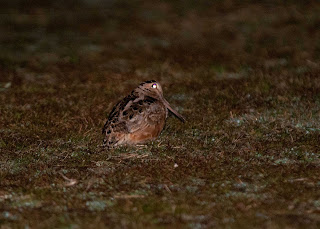 In other news, we worked on the Green House this weekend (link to the photo album) but still managed to see the Bald Eagles sitting on our beach again and got this decent photo of Savannah Sparrow. 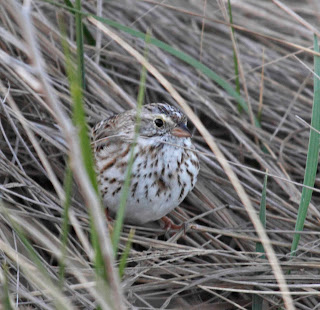 Heading back down to Florida for a quick trip later this week.  Stay tuned.