The shorebirds are back in the Villas picking worms and other things out of the mud at low tide.  They are southbound already from their arctic nesting sites.  Imagine, they left the Villas on June 1, flew all the way to the arctic, laid eggs, raised babies and are already back in the Villas on August 1.  Quite a feat.

I managed to photograph some banded birds along the beach over the past few weeks.  And guess who's back?  Stumpy!  He/she made the trip despite only having one foot.  Way to go Stumpy!  Unfortunately, I didn't get a photo of Stumpy this week but I hope to see him/her again before the bird departs for Florida or South America. 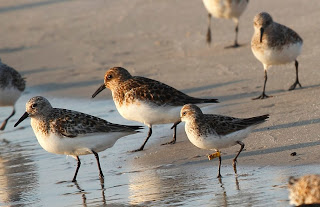 The second photo is from July 30.  I think it is pretty cool that this little bird travels from Suriname to the Arctic and back each year and uses our little beach in both directions as a rest stop. I mean, these photos are literally from the same beach - at the end of Ohio Ave in the Villas. I am still waiting for the full report from my friend who runs the bandedbird.org data project to learn more about this bird's travels. 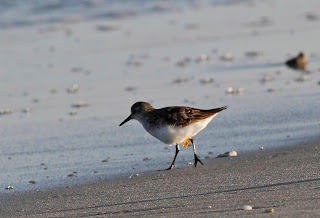 Did you ever wonder where the name Semipalmated came from?  It is used for both the Sandpiper and Plover.  It indicated that the birds have partial webbing between their front 3 toes.  Here is a photo of 54J showing that characteristic: 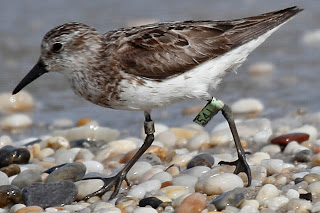 That concludes your shorebird lesson for today.  Keep your eyes open for early migrants.  Warblers such as Waterthrushes and Yellow Warblers are starting to get sick of the north and heading south now.  Unfortunately, one less Louisiana Waterthrush will make the trip this year as I found him dead in the yard last week.  Sad.  Of course, I have him in the freezer so that I can drop him off at the Academy of Natural Sciences at the next DVOC bird club meeting.  NERD!

Another great post. Thanks for the lesson on what semi-palmated means. Not that it will help me - I just call them all sanderlings, because I can never see that little back toe!