The weather this weekend was very unusual for Cape May.  Friday and Saturday brought very strong winds from the south as a result of a tropical storm out in the Atlantic.  This weather pattern made the ocean and bay very dangerous for boating, hence our scheduled overnight pelagic trip was cancelled :-(  That gave us more time to bird on land on Saturday.  It also made a lot of migrating birds stay put until Sunday morning.

Sunday morning brought rain to the Villas, so we stayed home until about 8 AM and then headed to Higbee beach for migrants.  We were happy about a few things. First, our friends Chris and Gerry are back for another fall season of birding.  They are great fun and much better birders than us, so we tend to learn a lot from them and have fun while doing it.  Second, there were decent birds hanging around area including lots of Bobolinks.  This is a bird that I have had difficulty seeing until recently when I learned that they say "pink, pink, pink" when they fly.  Now, I see them a lot more but they are usually flying overhead and out of sight.  There was a flock of about a hundred birds swirling and landing in the fields on Sunday so I got a few photos. 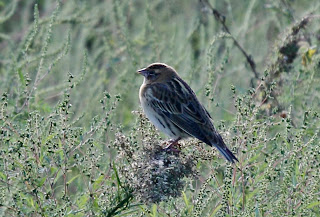 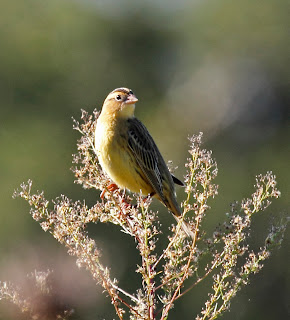 Bobolink - more yellow than the other bird

Third, we were treated to a nice Bald Eagle show down at the canal.  We managed to show up at the canal just as the ferry left Cape May for Lewes DE.  Just after the ferry left the dock, 2 adult Bald Eagles soared in and started to pick fish out of the ferry's wake right in front of us.  I had an eye level view from the top of the canal bank.  Di was at the water's edge washing dog poop off of her thumb, so she didn't have as good a view as I had.  And poor Barbara was back at the house getting her binoculars because she realized that she forgot them as we pulled into the parking lot.  Oh well, they will just have to rely on the photos.  Remember to click on the photos to enlarge them. 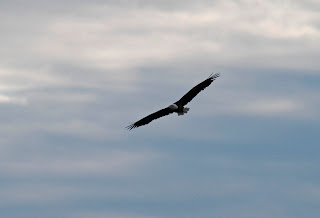 You can see the ferry terminal in the next few photos.  This is at the west end of Cape May canal.  There are rock jetties lining both sides.  I am standing on the top of the south jetty taking these photos.  The photos are not particularly clear because it was still pretty cloudy and darker than my camera can handle for action shots but I think you can get the idea of what is happening. 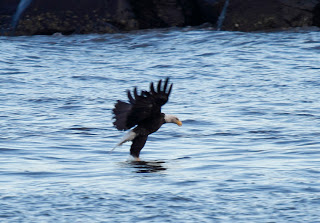 Bald Eagle grabbing a fish from the water 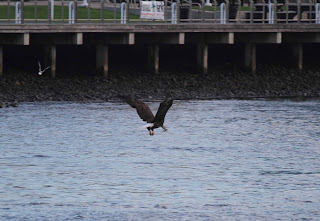 Bald Eagle with fish in his mouth 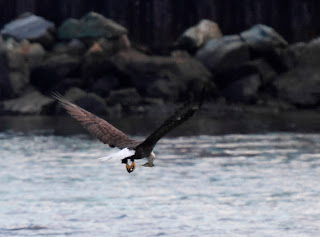 The eagle took one more pass out of the canal and then turned around and headed home literally 20 yards away from where we were standing.  These photos are not cropped by that much and they are pretty good if I do say so myself. 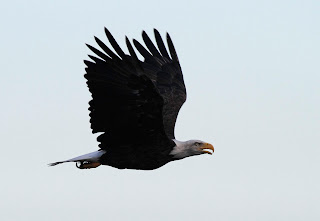 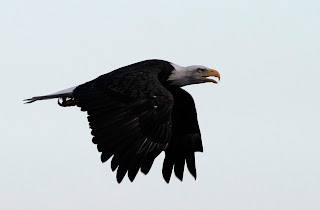 Sunday turned out to be a pretty good day for birding.  More to come later.

Wow! The shots of the eagle flying up the canal were superb! Loved the bobolinks, too.