Labor Day - For Sure

That's about how it went this weekend. It was hot and humid all weekend, but Isaac left us relatively alone until last night which was good.  We had 3 highlights this weekend. 2 of them came right from our beach.  The first was 2 Pectoral Sandpipers on the beach literally a day after I told Diane that nothing really different comes to the Villas.  Pectoral Sandpipers are different.  They are called "Pectoral" because of the way the dark on the breast ends abruptly just below the "pectorals"  (think boobs). 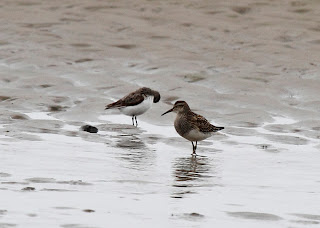 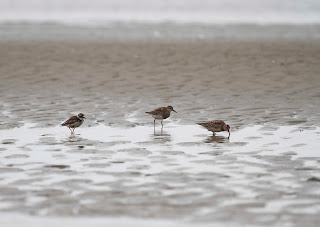 The second highlight was 3 adult Bald Eagles on the beach at the end of our street.  One bird landed on the sand bar and then was chased off the beach by 2 others.  The first photo is of the first eagle coming in for a landing. The second photo are the 2 resident eagles chasing him off. I couldn't get all 3 eagles in the same shot unless you wanted to look at little dots of black against the big sky over Delaware Bay. 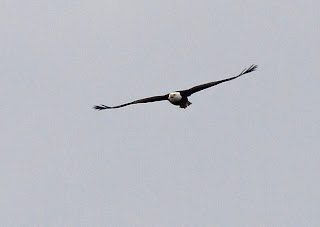 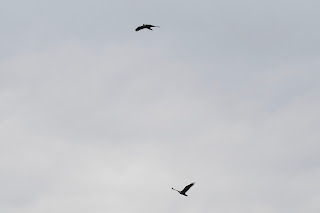 The third highlight for this weekend also came from the Villas - Cox Hall Creek WMA which I have written about in the past. This is the old golf course that they turned into a park.  This weekend, we got a text message about 2 Lark Sparrows at CHC so we hopped on over to see if we could find them.  Yes, we did.  It was complete dumb luck that we saw AND photographed the Lark Sparrow before it was chased away by the jogging-mom-with-baby-stoller-and-dog!  Just dumb luck that I happened to look on the path and notice the little bird picking at the dried grass clippings. 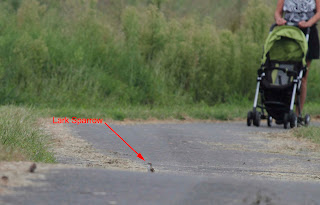 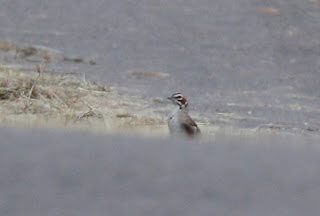 We also had fun boating and fishing this weekend for the first time since we got the houses.  Di caught 3 Rock Bass and a 2 foot Shark. Ask her to show you the pictures.
Posted by Linda