You may not care about that, but I was at the game last night sitting in Row 18 behind home plate in the "Diamond Club" courtesy of Di's company tickets.  Sweeeeet doesn't come close to describing the seats and the experience.  Why post this to a bird watching blog?  Well first of all to brag about the Diamond Club seating.  Second, to brag about the Phillies taking first place by a half game over the Braves.  Here is a photo of me with Raul Ibanez at bat: 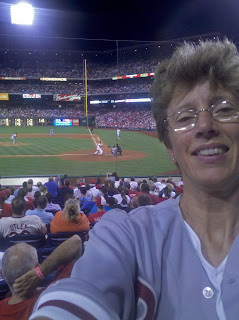 And third, because I did have a nature experience at the ballpark.  Although it wasn't the bird kind of nature, it did have rather large wings.  Di and I were coming back to the seats after buying a soda during the 3rd inning and the staff person put his arms up to stop us.  I thought he was stopping us from going to our seats during play which is what they usually do, but he was stopping us from stepping on this: 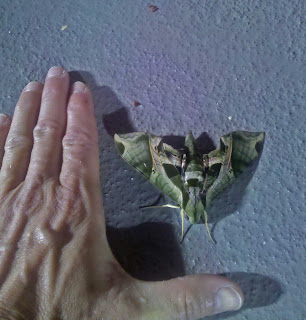 Of course, I had to "rescue" it from being stepped on so I picked it up and proceeded to try to walk it out of the stadium.  As I walked it through the clubhouse/dining area, it decided to take off and hang onto the ceiling.  Ugh.  Next thing you know, I am balancing on a chair, and trying to coax the thing into a stolen beer cup while the Diamond Club diners are looking at me like I'm nuts (OK).  Once I had the thing in the cup, it was easy to get past the gatekeepers to let it go.  Job well done - or so I thought.

What do you think showed up at the pitcher's mound in the 7th inning?  Yes, my moth traveled all the way back into the stadium and proceeded to flutter around the pitcher's mound before settling in the grass between the mound and home plate.  I didn't see it again and assume that it knows what it's doing and is rather upset with me for moving it so far from home. . .
Posted by Linda

Looks like a pandora sphinx. What do you think?

Sean -- I had difficulty finding the correct ID for this moth. I think Pandora Sphinx is correct. Thanks.