I have seen text updates all week that include a Sora at Cape May State Park at the Lighthouse and warblers, and hawks and, and, and.  Once again, I talked the girls into driving down to Cape May after the Phillies game on Friday night so that we could be there bright and early.  Biggie invited us to stay at her house, so all was set for a big day on Saturday.  Oh, and I brought the new lens with me too.

After a long day of work, a Phillies game, and arriving at the shore at midnight, we were up and out of the house at 6:15 AM on Saturday morning.  As soon as we walked out of the door, I knew that we were probably doomed due to the stiff wind coming out of the SOUTH.  That means that birds migrating south for the winter would have to fly into a 20 MPH head wind.  Which is NOT going to happen.  Crap.  The morning was basically a bust except for the delicious French toast breakfast.

Sunday morning was much better.  We awoke to winds out of the East North East so we got good songbird flight at the Higbee dike and went to the Hawkwatch platform to see if hawks were moving. Boy, were they ever.  We counted plenty of raptors of 9 species.  But the big find of the day was the Sora.  Here is a photo taken with my new lens at 400mm (I added a red arrow to help you find it): 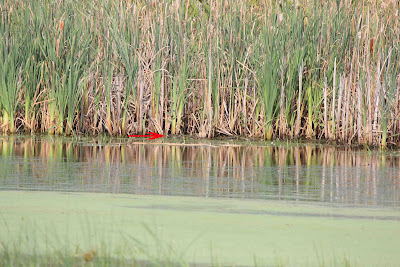 We met a guy on the boardwalk who was specifically searching for the Sora because he had never seen one before.  Barbara found the bird with her new super scope by scanning the other side of the pond slowly. Then, bam, she says "Oh, here's the Sora".  It took her like 2 minutes and some good luck.  I cropped the original image with Photoshop to try to show you what it looked like in the scope: 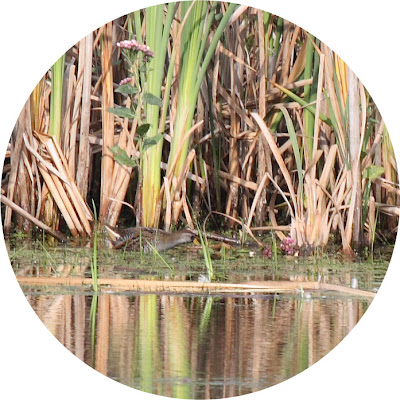 More about the new lens and some more photos later.  I'm exhausted and going to bed.
Posted by Linda

Cool shots! Glad you are having fun with the new "toy".

That scope was a great investment for the "nerds" - especially since Barbara purchased it :-) We have a new perspective on lots of birding opportunities.