Not What I Expected

I snuck in a a quick stop at John Heinz Wildlife Refuge (also known as Tinicum) on Thursday.  I only had 30 minutes, so I only made it to the boardwalk.  It was "blowin' a gale" as they say.  The wind was blowing so hard it blew my trademark pen (Bic roundstick, medium, blue) out of my ear.  The water was very low.  So low that the Snapping Turtle was making snow plow paths through the mud.  Not good for the turtle, but good for the shorebirds.  There were 25 Lesser Yellow Legs, 10 Greater YL, and 20 Pectoral Sandpipers within 20 yards of the boardwalk.  I didn't have the camera with me because it was an unplanned trip.  Besides, it was threatening to rain hard.

Which it did late on Thursday.  Rain, that is.  It rained alot.  There was flooding all over the area.  Highways were shut down on Friday, rivers overflowed their banks.  Etc.

So, why did I think that Tinicum's water level wouldn't be affected.  We went this morning with camera, scope, 2 dogs and 4 birdnerds.  It was cold - and still blowin' a gale.  I promised the girls breakfast at Nifty-Fifty's after the trip which is the only thing that kept them going.  Anyway, we certainly didn't see any shorebirds.  The water was so high that part of the boardwalk was inaccessible.

We walked around the other way and got to see our first Yellow-rumped Warblers of the fall season and a few terns whirling over the water.  We noticed that one tern was much smaller and darker than the others.  It was a Black Tern, which we really didn't expect to see at Tinicum.  Here are photos - not very good, but we can certainly use them for ID purposes. 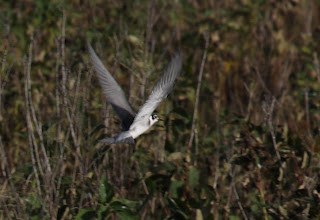 Black Tern - notice the gray wings, dark spot on shoulder, and no fork in the tail 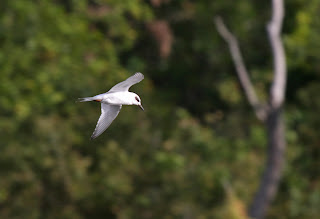