I have so much fodder from our trip that it has been difficult to pull it all together into stories rather than just post a mile-by-mile recount of our trip down the coast.  So here is the last installment of the trip notes. Highlights include Golden Eagle sitting in a field, Gray Ghost, Elephant Seals and Coyotes.

The Golden Eagle was spotted south of where we saw the Condor where the land started to flatten out a bit down by Hearst Castle.  We originally saw the bird flying erratically and then land in the middle of a field.  I screeched to a halt on the side of the road and ran across the highway to take a few shots. 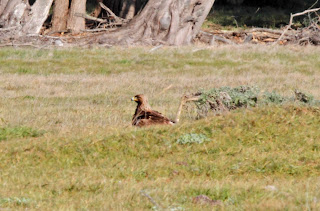 It turns out that the Eagle had harassed a Red-tailed Hawk into dropping something and had landed on it to claim it.  A few minutes later, the Hawk worked up enough courage to chase the Eagle out of the field and out of sight.  Having the Red-tail chasing the Eagle gave us perspective as to how big the Golden Eagle really is.  Trust me, its a big raptor.  Second only to . . . you guessed it - the California Condor.

A few miles after this, we saw another raptor flying over another field and pulled over.  This time it was the male Northern Harrier which is known as the "Gray Ghost".  This bird is not rare. It is not uncommon in our area. I have seen many.  But it is cool to see the gray ghost.  It also brought back memories of my first Harrier which we saw along this same stretch 20 years ago. 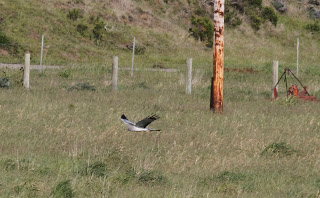 It is sad to say that these birds were not the highlight of our day - which they would be on any other day.  It's just that we saw so much, including the Condor and Elephant Seals, that it was just one more WOW for the day.

Oh yeah, we saw Elephant Seals.  They were hauled out of the water on a protected beach.  The State Park system put in a nice parking lot and boardwalk so that you can get up close to the seals without disturbing them.  We could have stayed for hours. 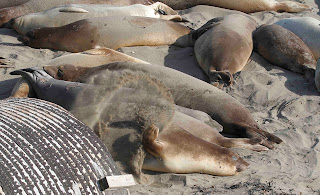 Elephant Seal flinging sand to keep the sun off 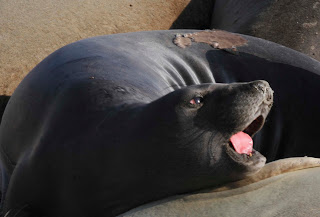 Elephant Seal grunting at a neighbor 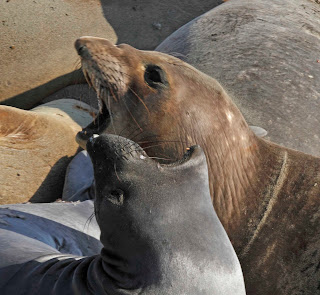 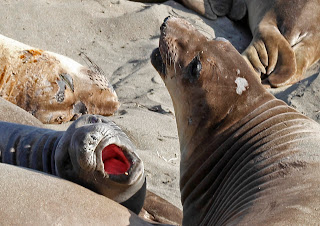 Look at the pink inside his mouth!

There were hundreds of seals out on the beach laying around and squabbling with their neighbors.  Oh, and it is a good thing that the wind was blowing away from the boardwalk because they STINK!

While in Pasadena, we birded the Arroyo Seco which is a little canyon that ends up at the Rose Bowl stadium. I have posted about this before.  This time, we had pretty good birds but that was not the story. The story is that we felt like we were going to be lunch for this Coyote! 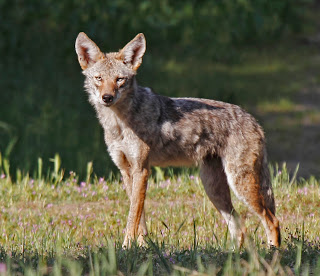 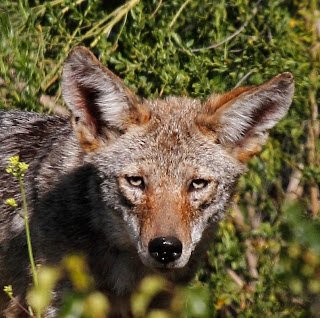 Look at those eyes - YIKES!

Although he looks mean, he was more interested in the gophers than the people. He obviously roams this very busy park often and is not bothered by the people, dogs, or horses.

Next post - back to the East Coast baby!
Posted by Linda

It's about time you came home! The south forty need to be mowed.

Seeing that coyote (actually, could have been more than one) was really something. We weren't even a little bit terrified, as I'm sure they encounter folks in this park all the time. We did watch one coyote stalking a gopher hole - wonder how successful they are at catching them? We saw a gopher pop out of the hole and Linda tried to get photos - it ducked back into the hole in an instant upon hearing the click-click-click of the camera. Anyhoo, love those sad coyote eyes...