To Sur with Love!

I know I spelled Sir wrong.  Or did I?  After a brief set back at the McDonald's in Monterrey where the Iced Tea dispenser broke and soaked both of us and made me bleed in 2 places, Di and I hit the PCH (Pacific Coast Highway) on Friday en route to visit our uncle in Pasadena. Some of the best scenery is along Big Sur.

I got 8 life birds and Di probably got 20 or more.  The biggest life bird for both of us is coincidentally the biggest bird in North America - the California Condor.  The sighting is also a cute story . . .

The PCH is a twisty-turny-uppy-downy road with constant breathtaking views of the Pacific ocean and mountains for over a hundred miles.  It is almost too much to endure without taking a break.  So much so, that we pulled into a State Park for a rest and to look for a bandaid to help stop the bleeding from what is now know as "the iced tea incident".  As soon as we got out of the car, we were met with a flurry of bird activity including this Stellar's Jay. 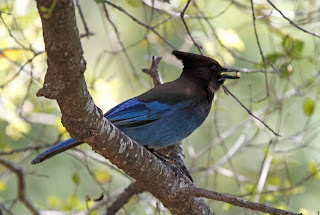 The ranger on duty obliged with a bandaid and was happy to give us directions to good birding locations. He told us that the best birding location on the whole Big Sur coast was back north on the PCH about 5 miles - where we just came from.  Diane hesitated to go back 5 miles but then he asked us where we were from and reiterated that it was only 5 miles up the road, insinuating that we were already 3,000 miles out of our way so what was another 5?  Good point.  Off we went - back north on the PCH to Andrew Molero State Park for great birding.

The ranger at the Andrew Molera gate was a peppy young woman who just oozed happiness.  I told her that I would pay the $10 entrance fee but I wanted it back if we didn't see a Condor.  She said that she couldn't make that deal but proceeded to tell us that we could see Condors down the road about 20 miles.  That would be 15 miles south of the other guy's park.  We parked and hiked at Andrew Molera and saw great birds and great scenery: 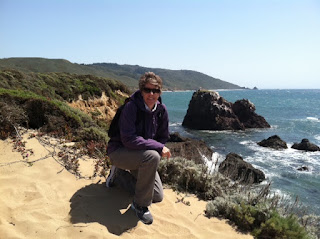 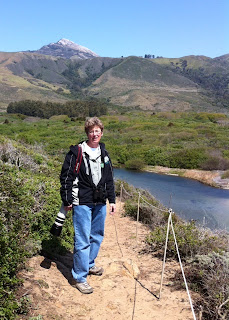 Why does Di keep telling me to take another step back for this photo? 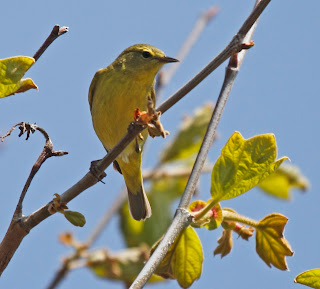 Orange-crowned Warblers were singing and posing 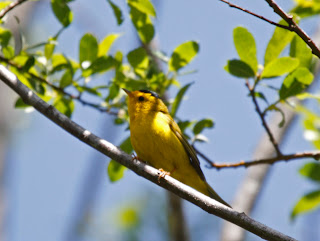 So was this Wilson's Warbler - I love the little black cap 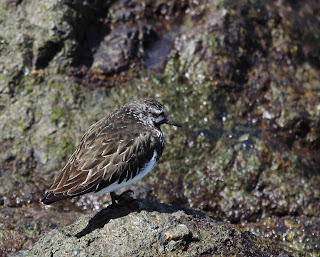 Surfbirds were picking along the rocky shoreline

We headed south again to Julia Pfeifer State Park where our park ranger told us we may find Condors.  She said that there were 2 fledged babies along the ridges and that the parents were often seen there too.  What she failed to mention is that there was also beautiful waterfall that went right to the beach and water that is a color of blue that I can't describe: 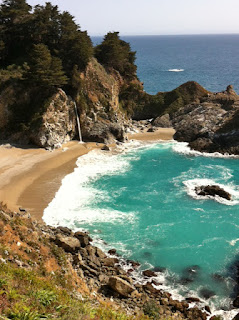 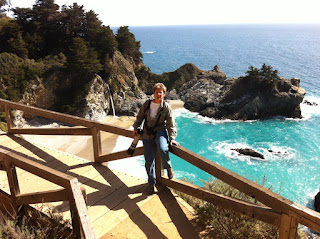 Even though we were both mesmerized by the water, we kept scanning the skies for big birds - without luck.  On our way back to the parking lot across the highway, I stopped to scan the canyon and thought that I might have spotted something.  Take a look: 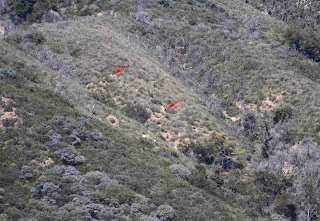 That is when Diane started scanning the skies and said "I think I got the Condor", or something like that.  I looked up, way up, no farther up than that, waaaaay up there and saw a tiny dot in the sky.  It could have been anything, but just then it turned around and viola!  Condor.  You can tell this is a giant bird even at that distance. The photo below is zoomed way in and cropped. That is how high this bird was soaring when Di picked it out of the thin blue sky. Literally. 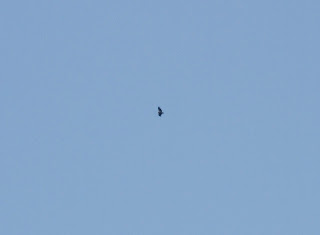 If it wasn't 20 miles back in the wrong direction, I was going to go give that young woman another $10!  Her tip really paid off.

One of your best posts...ever!

That drive down the coast was really spectacular. Poor Linda had to keep her eyes on the windy, twisty road, which meant that I got the benefit of enjoying the scenery.

Seeing that condor is something that I'll never forget. Truly memorable.

Can't wait for the continuing story of our drive, so I get to live it all over again.

That water looks tropical. What life birds did you get?