I work a block away from the Edgar Allen Poe house in Philadelphia.  There is a bronze Raven sculpture in the front yard of the house where he supposedly lived for a few years.  Ironically, there are no Ravens in Philadelphia but there are lots of Ravens in California.  Lots.  We encountered Ravens on each outing from San Francisco down to Pasadena but a few are blog worthy.

The first Raven we photographed was hanging out on a fire pit at Muir Beach.  California allows dogs and fires on almost all of their beaches which is pretty cool.  This Raven was obviously used to both of those things. 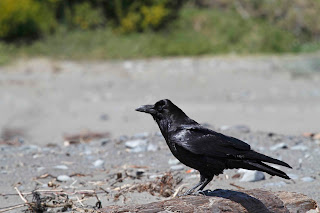 Check out the big beak and thick neck on this bird that distinguishes it from a Crow along with the size difference.

The next notable Ravens were seen at Mt. Wilson observatory outside of Pasadena.  Di and I took a drive up to the top of the 5,000 foot mountain where they have several really large telescopes on Sunday.  One of the workers noticed our binoculars and camera and asked if we would be interested to see a Raven's nest.  Hell yeah!  He said "see that cliff over there?" "Um, which one?" "the one with the missing rock" "Um, which one?".  Well, you get the gist of it.  He was patient and we finally saw the nest: 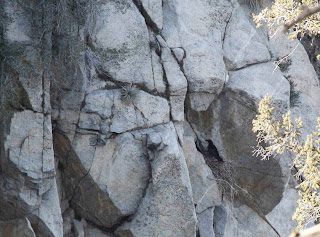 And then we got to see the birds fly out of the nest and soar around the canyon.  Trust me, the soaring photos were terrible!  Here is the best shot I could get of the Raven leaving the nest: 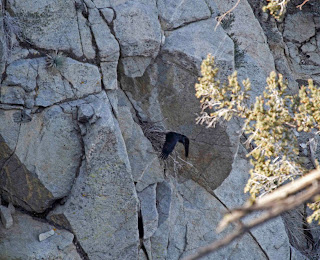 They were quite cooperative and landed on a tree snag right along the path to the telescopes for these photos. 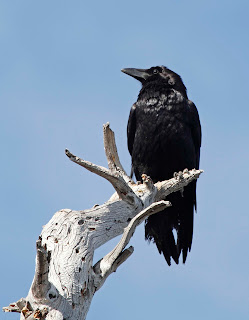 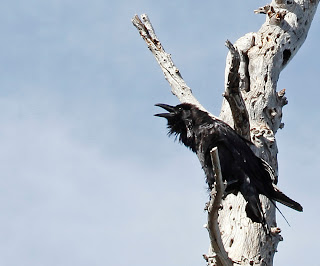 But the raven, sitting lonely on the placid bust, spoke only,
That one word, as if his soul in that one word he did outpour.
Nothing further then he uttered - not a feather then he fluttered -
Till I scarcely more than muttered `Other friends have flown before -
On the morrow he will leave me, as my hopes have flown before.'
Then the bird said, `Nevermore.'
Posted by Linda

Did you know that your friend Amy was born in the hospital in which E.A.P. died? Church Home & Hospital in Baltimore. However, they were not there at the same time.

HA. That is funny. Thanks for the tidbit