The whole trip is really made possible through the work of Dr. Steven Kress. He is the guy who had the idea to restore Puffins to Maine.  The birds were eliminated from the state through hunting and egg collecting back in 1885 or something like that.  Dr. Kress had the idea to take a few Puffin chicks from Newfoundland and put them on a rock island in Maine and hand feed them to see if they would come back to breed. That was back in the 1970's. The birds did come back to the island (after 7 years at sea).  And now there are about 600 Puffins in Maine breeding successfully.  He also works on other islands restoring gulls and terns and other sea birds too.  Well, he doesn't actually work on the islands - he has interns to do that now.

One of the islands that he manages is Ross Island. We took a field trip there and actually went onto the island to see gull nests. That doesn't seem like a big deal, but apparently the gulls are in trouble up in Maine and need help.  Check out these photos. The first photo shows our method of arrival.  The rocks were covered with seaweed and VERY slippery.  We had to hold onto each other to climb up to the dry rocks. 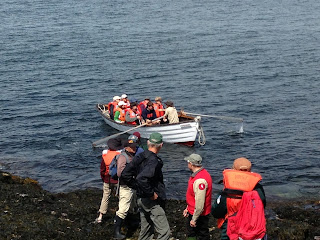 Once we were on the rock, Dr. Kress gave us the lecture about the gulls and terns. He is a master at giving the talk and getting people to care.  Of course, I couldn't paying close attention when there were so many birds to photograph :-)
The gulls are not exotic - just Great Black-backed and Herring gulls which are the same gulls that we see at the shore.

It was pretty neat to see their nests and eggs.  Then the strangest thing happened - Dr. Kress walked over to a nest and picked up one of the eggs.  I couldn't believe my eyes!  It has been drilled into us since we were little kids to never go near a nest let alone pick up an egg, but here was the famous bird guy doing it.  Then he proceeded to show us that the baby bird was trying to get out of the egg - it was pecking it's way out.  Then, as if that weren't enough, he put the egg up to everyone's ear so that they could hear the chick pecking and cooing!

Get ready to have your mind blown here because mine sure was. After we all listened to the egg, Dr. Kress put it back in the nest and proceeded to grab 2 Herring gull chicks out of another nest and pass them around!  I swear, I almost had a cow.


These two chicks made the rounds and were returned to the nest. The one that Tara and I had was really chirping. I felt bad for him but he was no worse for wear.

Mom seemed happy to have her brood back too.  She waddled back over to the nest and promptly settled in.
Anyway, you might not think that was unusual but I sure did.  It was the best field trip of the entire week.

Was delighted to see the Philly Bird Nerds in living color! All in all you seem to have had a good time. Happy upcoming natal day. I have pantyhose older than you. HH