A Bird in Hand is Worth Protecting

Yesterday, Connie, Di and I joined the scientists on another banding effort to help track Red Knots and other endangered shorebirds that migrate to the Delaware Bay each May.  You know that we are volunteering to guard the protected beaches, but yesterday we also had the opportunity to actually work with the scientists to band the birds.  Connie and I did this last year too.

We showed up at 9 AM and helped set the net on the beach, then hid behind the dunes in the reeds until there were enough birds in the net area. Once enough of the target birds are in the area, the leaders shoot the cannons and make a catch.  We sat and waited, and waited, and waited.  It was hot, and hotter, and hotter.  Connie got a migraine and had to get off the beach.  We sat for another half hour, then at 11:25 - BOOM! the net was launched - without warning, without a countdown, just BOOM!  The co-director who was sitting with us even yelled "Shit!".  We all grabbed bins and other equipment and ran as fast as we could down the beach to the net. 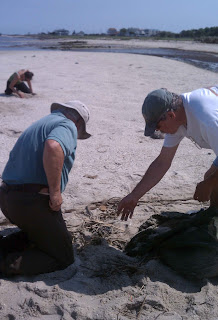 Clive, the man on the left, invented the cannon netting system. Here, he is working to place the cannons

All hell breaks loose when the birds are under the net.  We all surround the net and start putting sand around the edges to keep the birds from escaping. Another group of people grabs a "covering cloth" to put over the net so the birds calm down. Then the experienced leaders start taking birds out of the net and yelling out what species it is - "SANDERLING! Who has a Sanderling box?" TURNSTONE! Get me a Turnstone bin" "REDKNOT! Keep a count of how many are in your bin" "Who has the geo-locator bin?"  And on and on until the bin that you have in your hands has the appropriate number of birds.  Then you walk the bin and birds back down the beach to where we were hiding in the dunes.

In the meantime, other experienced leaders are setting up the base camp with canopies and "holding pens" for the birds.  We bring the bins of birds back to base camp and then unload them into the holding pens.  Each species of bird has their own pen.  Once again chaos with people shouting "Where do you want these KNOTS?" and "Don't put those birds in that pen" and stuff like that.

All the yelling is necessary to ensure the safety of the birds. I know it seems mean to capture them, but the research that they provide to the scientists will ensure their survival as a species and help protect the horseshoe crabs at the same time.  You just have to keep that in perspective as you watch these scared little birds under the nets and being carted around and . . .

finally being handled and banded.  Once the birds are in their pens and the scientists have a plan, we set up "teams" of banders to process the birds.  Yesterday's catch had over 100 Red Knots and 100 Ruddy Turnstones which is alot of birds to process as quickly as possible. Each team starts with a "bander" - the person who clips the little metal bands with identifying numbers around the ankle of the bird.  That was me yesterday - holding endangered Redknots in my hand and using pliers to crimp the band around the bird's ankle and then reporting the number to the "scribe". 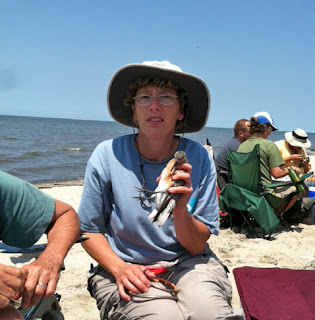 That's me holding a Red Knot.  Look at the agony on my face from being so nervous!

The scribe documents everything about the bird such as the flag number which is put on by another member of the team aptly name "the flagger".  Lime green flags with number/letter combinations are also put on the birds legs. These are easier to read at a distance and are shown in my last post.  Then the bird moves around to "the measurer" which was Diane yesterday. She uses calipers to measure the bird's bill length and overall head length, then she uses a jerry-rigged ruler to measure the birds wing. 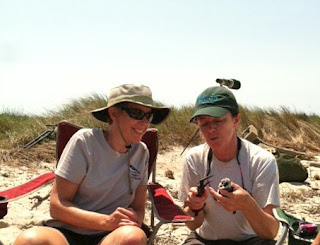 Then she passes it to "the weigher" who puts the bird into a soup can that has both ends cut off and puts it on a scale to get the weight.  The scientists are very interested in the weight of the birds and can tell if a bird is doing well or not based on the weight.


Once the bird is weighed, it is put into another bin and taken to the real scientists who gather samples of blood and other stuff in order to do the real research.  Once the bird has gone through that, he/she is released and usually flies away squawking a protest.

Yesterday, our team banded over 50 Red Knots and 60 Ruddy Turnstones.  Other teams were processing close to that many too which was really great for the scientists.  So, remember to look for the little green flags and write down the code if you can see it.  Send it to me, or enter it at www.bandedbirds.org
Posted by Linda

First of all, thank god Linda cropped the photo of me, saving readers from having to see my sandy, fat legs.

But more importantly, what a great experience this was. I never thought I'd get to handle birds on my first time out.

Great post, Linda. And great job getting (all of us) involved in helping with this important cause.