Lost in the Woods

This is Diane writing. I joined the scouting activities late, arriving at the shore after lunch on Thursday. Linda and Barbara had been out and about in the county since early morning, scouting away, and I wanted to “do my part”, so Captain Linda sent me to Cox Hall Creek (which we still call by its former name, Villas WMA) to find the red-headed woodpecker. Keep in mind that I spoke to Linda the previous evening while she herself was frustratingly trying to find said woodpecker at the same place – no luck for her. I chuckled when I received the assignment, wondering how I, the least skilled birder of the bunch, would ever accomplish my task.

Off to the Villas WMA I went, parking in our usual spot. I headed straight out the long path, with no real destination in mind. I came across a dirt path that cut right. I took it. Then came upon a paved path that veered left. I took that. Right, left, left, then right again. I think. Then I hit the lake and thought for sure I was oriented. I walked around the lake, then came upon another paved path that curved away from the lake. I took it (why not?) and headed, I now know, away from where the woodpecker had been previously reported. I ended up in what I consider the back-edge of the area, stopped to look around at where I was, when I saw a flicker of movement out of the corner of my eye, over near a stand of tall pines. I peered through the binoculars and was treated to a great view of the red-headed woodpecker on the side of a pine, about four feet from the ground. It flew low from tree to tree, and I never lost sight of it. I quickly dialed the other scouters to tell them the news. We were all thrilled. Barbara had a good idea and told me to “drop a pin” on my iPhone map app, then capture the screen as a photo to preserve the spot where I saw the bird, so that we could reference it the next day, then again on The Big Day. All of this took about fifteen minutes (shorter than it’s taking me to write this post – sorry). 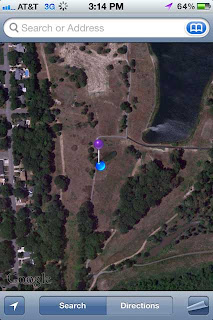 I consider it lucky that I happened upon it. On Friday, Linda, Barbara, Lori and I all scouted the area together. Linda and Lori headed off in the direction where the bird had been previously reported by “real birders”. Barbara and I headed back to “my area”, and once again we found the bird – same area, different set of trees. On The Big Day, I dragged all of the nerds back to that area and we found the bird within about five seconds of arriving at that lucky spot.

As mentioned in Linda's post, we all did our part for The Big Day, and it felt great to be able to contribute by finding this bird. I’m sure we would have found it had I not scouted, but it would have taken longer and our frustration levels would have been elevated. Getting lost in the woods turned out to be quite serendipitous.

I am finally getting caught up with the posts, and I just wanted to tell you Diane, that I enjoyed this post very much- I only wish I had been able to spot the pecker this past weekend. :(