One of Those Weekends

Wow. We finally had one of those weekends that makes you say "WOW".  All of the stars aligned for a pretty great weekend of birding at the shore.  The winds were weird, the birds were stacked up to the north, and the Nerds were all available to be at the shore together. Get ready for back-to-back posts. I have too many stories and photos for just one.

I got 2 life birds and the other Nerds probably got lifers too.  I started Saturday morning without the other Nerds at Higbee with my "Fall Friends" Gerry and Chris. I had my first life bird by 7:30 AM - a  Clay-colored Sparrow that sat in a little tree at the canal long enough for a photo. 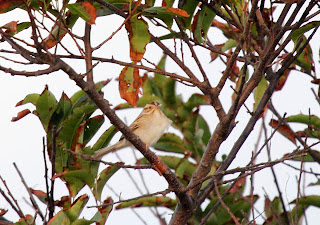 Birds were flying past us at a ridiculous volume.  All birds heading NORTH. Why north?  Remember my post from last year?  We see birds flying north in the morning because they were flying the right way (south) overnight, but found themselves over the vast Delaware Bay when the sun came up.  They instinctively turn around and head back to shore if they find themselves over open water after a hard night of flying south.  Anyway, there were over 1,000 Blackpoll warblers flying north along with hundreds of other birds - including the little Clay-colored sparrow that landed in front of us.

Next up, we were into the fields for some decent warblers and other birds. The topic of conversation was basically how dumb I was (nothing new there).  The dumb thing that I did this time was forget to bring nice clothes to the shore with me.  We had a memorial service to attend for my uncle George in Cape May Courthouse - and I forgot nice clothes.  What an idiot.  Of course, I don't think that Aunt Georgie would mind me showing up in jeans, but . . . Diane to the rescue!  She showed up with 2 extra pair of slacks, black socks and a nice vest that I could use.  Connie wore the other pair of pants!  We looked pretty good.  The service was really nice.  Here is a few of my favorite moments from the luncheon:

2 men behind me at the bar - one saying to the other "Well, a free lunch is a free lunch" and the other guy saying "That's exactly what George would have said!"  A woman asking if the booze was free or did she have to pay for the wine, then asking for 2 when the bartender said that there was no charge! Seeing Susan and Alfred.  Seeing Mim again.  Oh, and the impromptu Lincoln High School reunion.  George was a funny guy and it showed by the way everyone remembered him.

After the luncheon, we were back out birding but it wasn't birds that caught our attention.  It was Monarch butterflies.  We got word of a Monarch butterfly roost that was developing at Cape May Point by the dunes so we headed over.  Wow again.  Thousands of Monarch butterflies congregating on a few pine trees.  The experts on Monarch butterflies are Michael O'Brien and Louise Zematis. They were at the site educating dozens of people who came to see the spectacle.  The butterflies gather in the dunes to wait for southerly winds to carry them across the bay.  I don't know how they know to find the same trees as their brethren, but they do: 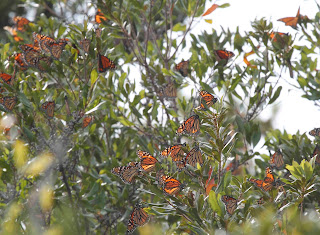 Monarch butterflies roosting in the sun 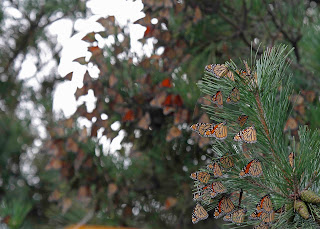 They all took off on Sunday. Some stayed around, some headed out over the bay.  Its one of those things that materializes and awes all who see it.  More later.
Posted by Linda