Will She Shut Up Already?!

I am sure that is what the birders are saying about me. Not for the usual reason (that I never shut up) but because I have been obsessed with trying to see a Connecticut warbler for the past 2 years.  Every time someone sees one, I run over to the location and stand there looking at nothing for long periods of time.  Then, I give up and leave without seeing the bird and complain about it for days.

Lately, when I see one of the regular birders I start off the conversation with "Do you know where I can find a Connecticut warbler?" or "When are you going to get me a Connecticut?" or something like that.  They generally reply with something like "I wish I could get you one" which means "Shut up already".

Gerry and Chris have been telling me that you have to be the first to find the Connecticut or you won't see it.  They told me to stop chasing after the birds that get texted.  Guess what? They were right.  We got a Connecticut on Monday morning all by ourselves.  We texted it for other birders but by the time they showed up from a few yards away, the bird had already disappeared.  But not before I got a few photos.  The other birders were still standing there looking at nothing when we left. 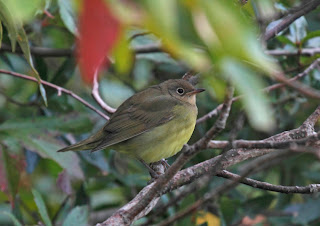 I know what you are thinking:
A) All of that for this dumpy little bird?
B) She still won't shut up

Yes, all of that for this dumpy little bird.  It doesn't look like much and in fact, I have probably seen one before and just assumed that it was a Common Yellow Throat.  However, it is a life bird and a prize for any birder to see since it is so secretive.  And yes, I will probably not shut up.
Posted by Linda

OMG, shut up already! Maybe now that you've seen it, our weekends at the shore will be a little more pleasant.

Meanwhile, I'm pretty sure I've seen that bird IN MY YARD and didn't know what it was.