I'm not even kidding. These birders now have such a thing as a "magic tree". It looks like pretty much every other tree in Cape May to the casual observer - but not to the birders.  They know that the tree possesses magic powers.  The magic only happens just before sunset.  If you look at the tree at any other time of day - nothing.  Nothing special at all.  But once 5 o'clock rolls around, the magic begins.  Birds invade the tree looking for a quick meal and boy do they get it. 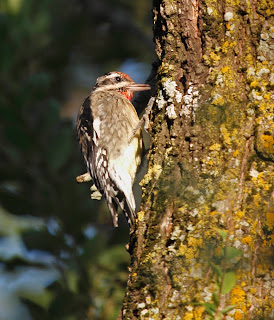 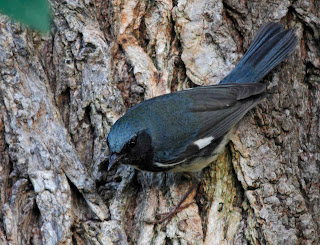 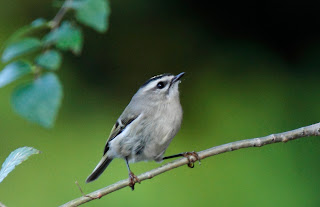 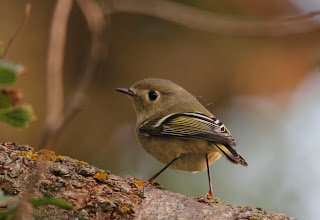 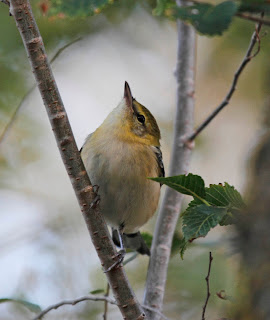 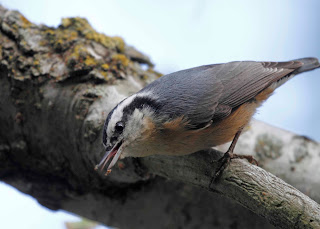 These images are a few of the terrific photos that I got last week at the famous tree on Bob and Edie's front yard.  They are very accommodating to us crazy birders and even invite us onto the lawn for closer looks at the birds.  I literally stand between famous bird photographers and authors a few feet from the tree to get photos like the ones above.  Not only do we stand together, but they give me advice too!  Pretty cool.

The photos above are not cropped by that much, if at all.  That is how close I am to the birds.  On Friday night, we counted over 25 Red-breasted Nuthatches in the tree. There were 11 of them on the same branch.  They were so engrossed with finding bugs, that they didn't notice how close we were to them, and they didn't care either.

Here is a cropped photo of Ruby-crowned Kinglet which shows why it is called "Ruby-crowned".  Click on the image to enlarge and notice that one red feather that barely peaks out of the top of his head.  Also notice the spiderweb hanging off of his back.  You can't get images like that unless you are really close to the bird. 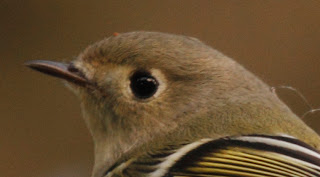 Thank you Bob and Edie and thank you Magic Tree!

I am so proud!